FIREBALL RECORDS was born in 1991 with a limited edition cassette tape of obscure singles and unreleased 1960s instrumentals by Edmonton, Alberta’s Wes Dakus And The Rebels and The Nomads. This was included with a Canadian instrumental discography published by Fireball Records founder; author, and musician Rich Hagensen and exemplified the roots rock focus of Fireball Records to come. 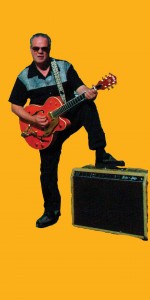 Rich’s first love is surf and rock instrumentals and his band The Surfdusters played that music on four Fireball Records albums. They include eleven band tunes from the soundtrack of the internationally famous cartoon ‘Spongebob Squarepants’!

Fireball Records wanted to do its part in keeping the 7” vinyl format alive. So far, the label has put out two EPs of surf/garage instrumentals and vocals by various bands with more coming.

The latest Fireball Records CDs are by Rich Hagensen and the Wailin’ Daddys and Rich Hagensen And The Crew featuring rockin’ songs in rockabilly, rock’n roll, country swing and blues styles  – from band originals to covers of early Canadian 45s – as well as songs of protest and social action.

In the future, Fireball Records intends to keep bringing you the best past and present roots music from the Canadian scene!